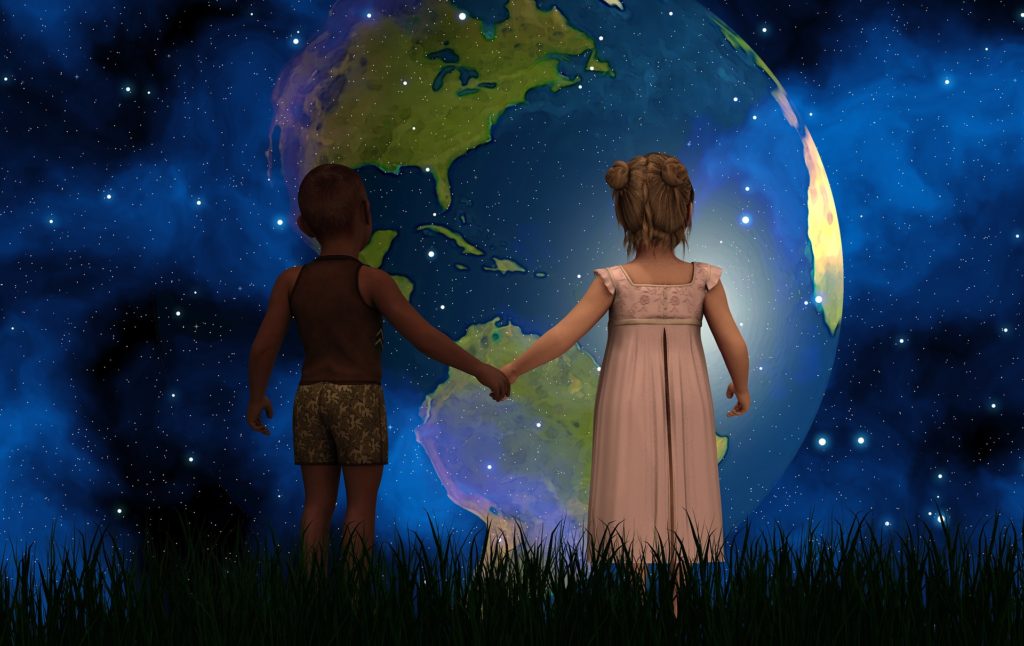 Creating peace and healing worldwide is achievable. Everything that we create and experience starts from a single point inside us and is projected out to the world through our two eyes perceiving black and white, good and bad, etc. Meditators and physicists alike are establishing the existence of multiple dimensions (11 according to quantum theory) which co-exist in the totality of time and space. What we do here in this dimension has an affect on the other dimensions and vice versa. Perhaps our biggest challenge has been how to make changes that can be effective at all dimensional levels preventing recurring patterns surfacing from deeper dimensional levels of our self.

In 1995, I stumbled upon an ancient symbol which was known to a small group of Reiki healers to open the heart and align the energy centers of the body. This symbol, I was told, was used by ancient Tibetans to represent Divine Love. As I began to work with it, I discovered that it had many more properties. We began to weave it into a ReikiWeave cloth used for various healing affects. Clients began to report a balancing and calming affect, reduced pain and swelling, and increased benefits from other forms of treatment combined with this cloth. One of the most common reports came from clients with carpal tunnel syndrome who wore our purple/peri wristbands and experienced significant changes within hours of applying it.

Testing done by Tainio Technologies and Technique indicated that the printed woven symbol design and fabric:

In a test measuring EMF given off by light bulbs, the application of this woven symbol design resulted in significantly lower EMF levels.

As intuitive healers and their clients continued to experiment with the ReikiWeave cloth, they found that healing remedies and prayers could be communicated like a radio tower when placed upon it. Often, techniques and remedies that had not achieved the desired affect were now working rapidly and with lasting results. What we began to see at deeper inspection was that a communication system in the physical body and all of its dimensional bodies was opening up and balancing. The various issues and challenges were like “arterial blockages” in this system altering the energy transmitted through it. This higher frequency energy, I believe, is the wholeness of energy – who we really are. As we attune to who we really are, we change the nature of what we project into this world and how we experience it. We align and harmonize all of the dimensional bodies, open up inner communication, and access higher frequency answers and affects. Samuel Hahneman said “Change the frequency and you change the matter.” Countless experiments with using thought and prayer have shifted outcomes to events as well as molecular conditions in the body (Dr. Larry Dossey, Candace Pert, Gregg Braden, Dr. Emoto, Joan Boryshenko and many more).

One of my customers reported an experience using our ReikiWeave patch and visualization CD, Divine Love Infinitum which had a profound affect on her entire family. Her nephew who was on probation for his involvement with drugs, “messed up big time”.  This time he was caught dealing drugs and had crashed his car. The judge told him not to bother getting a lawyer. She was going to “put him away” for 10 years. On a Wednesday, without telling her nephew, his aunt began using the ReikiWeave visualization. In the meantime, the nephew had refused court appointed attorneys believing his father would bail him out as he had in the past. When Friday came for his court date, he watched as the judge gave out tough sentences to each defendant who came before him with similar legal infractions. The last case of the day, the nephew stood before the judge with no attorney and fearing the worst. The judge asked him “Do you own a house?” “Yes” he responded.

“Do you have a job?” “Yes.” At that moment his boss stood up to speak on his behalf, saying that the nephew was a “star mechanic” and valued employee. The judge looked at the nephew and said, “I’m going to give you a second chance.” and proceeded to tell him that he may go to his job but must show up for weekly drug tests and more. His mouth dropped open in disbelief. He thought for sure he would be in jail for the next 10 years. He had already been in jail without bond for a month. His aunt proceeded to share with me the other things which she experienced during the visualization and the affect it had on other members of the family.

We Can Change The World

Here was an example of a recurring problem which was addressed with a simple multidimensional tool and technique with unexpected results and a profound healing for the many people connected to this situation. Imagine what we can do with clear, focused intention multi-dimensionally. Starting with our self, we can align, balance, and raise our frequency using this Divine Love symbol. We are like radio towers broadcasting worldwide and inter-dimensionally. As our energy fields expand and increase in frequency, we affect the whole of humanity and creation. In order to make the changes that will bring about world peace and healing, we must access energy and answers that come from a higher place (our wholeness- Divine Love) not where we created them (the duality and limitations of the mind). Let the single eye of our Divine Love wholeness which sees the entire picture and experiences it inter-dimensionally be our guide and direct and inspire the mind in its actions. This is why we have adopted the motto “Love is the answer, no matter what the question.”

Back to blog home page